Not knowing where I was going, I told my writer friend I’d pay for my ride to the John Varvatos presentation and hers back to the hotel, I arrive on a side street somewhere near Alphabet City. The sign-in was in an alleyway and I waited in the line, not realizing I could’ve bypassed it since I was an editor. Oh well, at least I got to walk in behind Christian Slater… 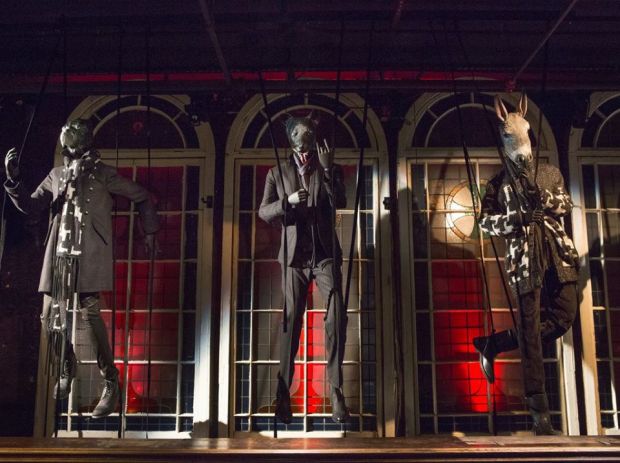 Moving past the curtained entrance, inside was pure theater. Asking whether #rockisdead or not, the atmosphere was that of a twisted gothic art installation – mannequins sporting animal heads, nooks with lounging models – but the collection was pure Varvatos. A mix of precise British tailoring with an everyday American sensibility, the suiting (in textural tweeds and checks), bits of leather and fur, and an extensive collection of accessories made it in Instagrammer’s delight. I never knew I wanted a pair of his burgundy pony hair Chelsea boots until I saw them on display.

Walking out of the venue, I contacted a friend who I haven’t met in a while and figure out where we’d meet for dinner. It ended up being a late night, so I slept in (all the way to 9 a.m.) and missed the Perry Ellis show. Rather than running around, I paced myself and had lunch with my friend who works at Hearst in their luminous cafeteria.

Grabbing my writer friend and heading back downtown for the shows, I didn’t get into the Nick Graham show (they wouldn’t let me in) and I missed meeting popular models like River Viiperi and Eric Rutherford. But all wasn’t lost: upon exiting Skylight North, we walked into Ken Downing (fashion director of Neiman Marcus) who acknowledged us as we were waiting for our rides. He had a chauffeur, we did not. Back to the Dream Hotel Midtown we went; it was time to check out and say our goodbyes to the lovely staff.

By the time we arrived at the West Village art gallery for the Jeffrey Rudes presentation, it was pouring. The gallery was packed with editors, photographers and everyone in between. Coming from the man behind J Brand, I knew to expect sleek and luxurious clothing. Harking back to the 70s jet set, this was a strong showing of leather and shearling (with a smattering of velvet) outerwear and knitwear done in spicy tones. It felt like money. And a paper thin leather jacket that I pray would’ve been gifted to me on the spot.

Before running out, I rubbed elbows with Steven Kolb (the president and CEO of the CFDA), and stepped back onto the rainy streets. Having approximately an hour before making my way to downtown, I walk through the village, inspect a few shops (including the Want Essentials boutique) and make my way to Penn Station where I took a train to the airport. Good thing I was early, as my flight was delayed and cancelled (they combined two flights into one). After a quick 1.5 hours in the air, I was back home.